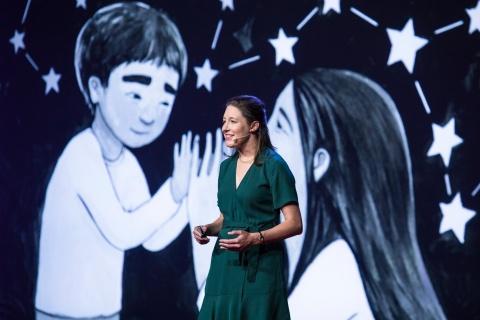 Her TED Talk in Arusha, Tanzania, in August marked the official start to the fellowship—but at that point, Emmett had already spent four months preparing for her TED debut. The return on her investment, she says, was worth it.

The TED Fellows program provides support to a global network of 400 visionaries, from scientists to artists to entrepreneurs, who collaborate across disciplines to create positive change around the world. In addition to participating in a TED or TED Global Conference, fellows receive professional mentoring and public relations coaching and membership in the TED community.

On the TED Global stage, Emmett discussed her research to prevent hearing loss, which affects more than one billion people worldwide—most of whom live in low- and middle-income countries. Emmett has partnered with a tribal health organization in Alaska, the Norton Sound Health Corporation, to merge Alaska’s sophisticated telemedicine system with an inexpensive cell phone-based hearing screening technology developed in South Africa. They’re testing this intervention in a community randomized trial funded by the Patient-Centered Outcomes Research Institute, with the goal of developing a school screening protocol that will reduce childhood hearing loss disparities throughout Alaska.

Following the recent release of her talk, we talked with Emmett about her TED experience, which she describes as “transformative.”

Read the interview on the Duke Global Health Institute blog

Are Two Always Better Than One?

From Division to Department: Research Growth in Head and Neck Surgery & Communication Sciences

Congenital CMV: What You Need to Know