The $600 Medical Device That Could Help Doctors Detect Throat Cancer 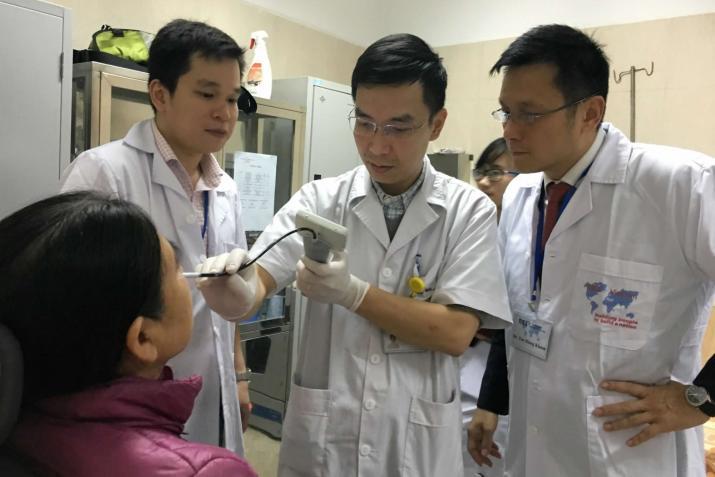 Photo above: Doctors in Vietnam check out a prototype of the flexible nasopharyngoscope initially designed by Duke engineering students

A patient arrives in a clinic complaining of a sore throat. This is no run-of-the-mill case of the sniffles, and her primary doctor has already put her on two different antibiotics, neither of which managed to dent her discomfort. Now she wants the expertise of a specialist. She’s feeling desperate and more than a little worried.

If we’re in the Duke otolaryngology clinic led by Walter Lee, M.D., the next step is clear. Lee  prepares a nasopharyngoscope, a long, flexible tube connected to a camera and monitor that affords him a closer look at the internal anatomy of the patient’s throat. Probably there’s nothing unusual, but maybe he sees something – a growth, a strange clump that warrants a biopsy. He might be looking at a tumor, but in that case, well, at least he caught it early.

But let’s say this is Vietnam. Most likely the doctor has the same plan in mind, but what’s missing is the flexible nasopharyngoscope, a $10,000 piece of equipment that only the most advanced clinics here own. Maybe the doctor refers our patient on to a specialist, who could be hours away. And if the patient can afford the trip and time away from work, maybe she makes an appointment. But that could take weeks, and you definitely don’t want to give cancer the luxury of time.

Lee, a professor of otolaryngology-head and neck surgery and a DGHI affiliate, has done more than a dozen medical missions in Vietnam since 2007, and so he knows this is a frustrating reality his Vietnamese colleagues regularly face. No matter how much they know, they are limited by their tools – in this case, a device so common in wealthy health systems that Lee’s clinic owns around 10.

“If the local doctors had a flexible scope, they could pick up cases earlier and get them referred for treatment,” says Lee. “I think we’d see better patient outcomes.”

It’s a problem that has bothered Lee for nearly a decade. But now, he thinks he has a solution: a $600 version of a nasopharyngoscope initially designed by Duke engineering students. And it’s about to get its first big test.

"The $600 Medical Device That Could Help Doctors Detect Throat Cancer"